Put Out the Fire

This past weekend, I had the opportunity to go to Oklahoma City for work.  Arlyn and I spent the weekend there.  We arrived at a restaurant Saturday evening(Zio’s Italian(delicious by the way)). When we got out of the car to enter the restaurant we noticed a fire in a dumpster across the street by a business. 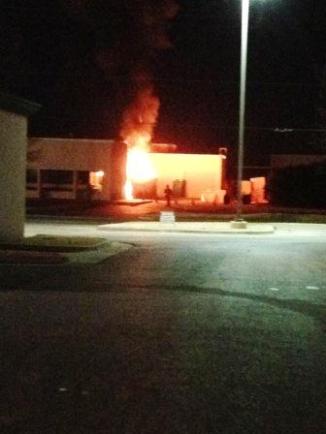 Like all good citizens, we went to get as close as we could.  It was a large fire.  As we got closer, we could hear the sirens of the firefighters arriving to put out the blaze.  We stood there and watched them work together to put it out.  Several other people arrived to watch with us.  Several cars stopped in the parking lot as well.  Then as you can see from the video, one of the engines finally blocked our view.  Since the show was over for us, we went inside to eat.

In the last several months, a lot of things have happened to cause us to ask the question why:

Shooting in a Theater in Aurora, CO

Shooting at a school in Newtown, CT

The list could go on and on.  In 2012, I found myself asking “why?” more than any other time.  Why has our country and our world gone so far off the deep end?  How did we get this far gone? I can only come up with one answer.  Because we as Christians have chosen to run from and water down the truth.  We have lowered our principles until there is no difference between the way we live and the way the unsaved world lives.  This past weekend, we ate lunch with some friends of ours.  The wife is volunteering to work with teenage girls who are pregnant and in difficult home situations.  She said most of them are raised in family situations where “abortion is the norm.”  She said it’s hard to teach them about abortion when their whole life, they’ve been taught something entirely different.  They don’t see abortion as taking a life.  They see it as what you do when you get pregnant.  We as Christians have tolerated sin and hid our heads in the sand for entirely way too long.  Now, the world we live in is crumbling around us morally and spiritually.  Sin is on a rampage like the fire in this dumpster. 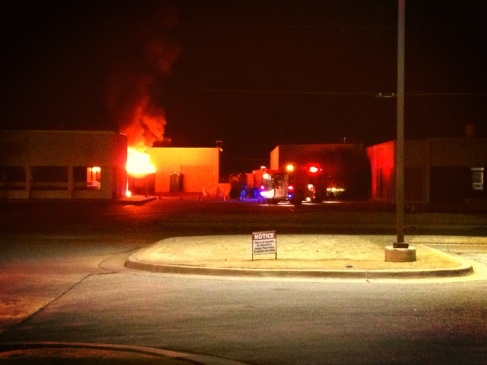 The only way this fire was put out was because a lot of firefighters from all over the city arrived on the scene and worked together as a team to put it out.  Plus, when it became a spectacle, they hid the fire from view so the team could continue to work together.  They didn’t allow “gawking, gossip”, etc.

The only way we can see this world come to know Christ as their Savior is if we as Christians work together to be a witness to all those around us.  Instead of asking why this world is crumbling, I need to be asking, “Why aren’t I doing more?; Why aren’t I being a better witness?; Why aren’t I serving God to the best of my ability? and Why aren’t I avoiding gossip and slander and focusing on witnessing for Him?”

Who can you be a witness to this week?  Start praying for them today.  Start asking the Holy Spirit to open the door for you to witness.  When He opens the door; walk through.  It’s the only way this world will change.  When we decide to focus on God and God Alone.

This entry was posted in Uncategorized. Bookmark the permalink.